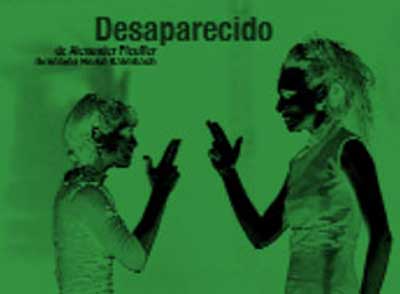 World premiere in Theaterhaus Jena on May 11, 2006.
Production of Theaterhas Jena.

Two women in a room. Two women who cannot leave each other, who compete with each other, who want to show off the victory over the other. They are not together by chance, the dream of their lives is considered as “missing”. They both loved the same man, one as a wife, the other as a lover. Each one wanted him for herself, not allowing the other one to destroy her own goal. But how do you treat someone who no longer exists?

The fight for the truth of the past is the only thing they both have. In this fight, lies is the appropriate instrument. A tale of two women that thought they lost what they needed to be happy.

Two women who cannot let their dream be destroyed, who cannot be otherwise than tolerating each other.

“…The play ‘Disappeared ’playfully shows how attacks accumulate between two women who did not know each other. How anger escalates into hatred and evil until both recognize that the liar, unfaithful, and missing person is the true enemy. A beautiful sequence, sharp, detailed and funny and with a style of modern Comedia Dell’Arte catches the audience and makes them enjoy this storm. “