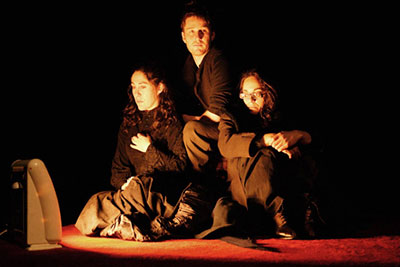 In Saint Petersburg, during a winter afternoon in 1905, while the troops savagely repressed the workers who protested in the streets to improve their living conditions; two actresses and an actor try to rehearse in a theater in the city facing the Neva River. One of them is Olga Knipper, the famous actress from the Moscow Arts Theater directed by Konstantin Stanislavky and the wife of the recently deceased Anton Chekhov. Olga blames herself for having lived away from her husband for the past few years, while he was writing in isolation in the warm weather of Yalta to cure his tuberculosis as she premiered her plays in Moscow. The other actors, Masha and Aleko, try to help her rehearse Chekhov’s play “The Cherry Orchard”, putting up with her prima donna attitude and trying to ignore the terrible fact that the rest of the actors have not. arrived. To help her regain the talent she believes she has lost, Masha and Aleko absurdly recreate the real circumstances of Chekhov’s death in a German sanatorium. The situation becomes ironic and hilarious as the actors discuss acting technique and the beauty of the theater in the context of the historic Bloody Sunday massacre on the city streets. The play, based on real events and characters, is a critical and sarcastic reflection on theater, acting and its limitations to tell the private drama of death and the public drama of political violence.